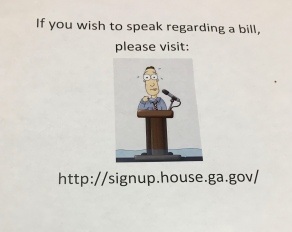 On February 12, 2018 a team from Georgia Women spent the morning at the Capitol “Working the Ropes” for HB 731. At 1:00 pm, the group proceeded to the Tax Reform Subcommittee Meeting of the House Appropriations Committee. Claire Cox (Georgia Women), Adele Stewart (Junior League of Savannah) and Helen Robinson (YWCA – Greater ATL), along with a representative for the Convenience Store Association of Georgia, spoke in support of the bill. No one testified in opposition. Rep. Buckner and Rep. Peake, both members of the subcommittee fought hard for the bill, but opposition was strong. The subcommittee was not allowed to vote on the bill, because, despite Buckner’s requesting it several weeks before, the Fiscal Note that must accompany legislation had not yet been delivered to the Subcommittee Chairman. Buckner received a copy of it (dated February 9, 2018) the next day from Rep. Powell.  Following the hearing, our grassroots group was told by subcommittee leadership that we would not get a second hearing and the bill would not be brought to a vote before Crossover Day on February 28th.