In the fall of 2017, following a question from a member, leadership at the organization Georgia Women (And Those Who Stand With Us) began meeting with their State House and Senate leadership in pursuit of the elimination of state sales tax from menstrual products in Georgia. Rep. Allen Peake was responsive and immediately agreed to support legislation but suggested a woman Representative should be the bill carrier. In December, we found our champion! Rep. Debbie Buckner enthusiastically took leadership of this bill and headed to Atlanta to gather bipartisan bill sponsorship.

Georgia Women leadership met with Rep. Jay Powell, Chair of the House Appropriations Committee, and were promised a hearing for the bill. Rep. Buckner worked the bill and the day it was numbered HB731 was a great day! 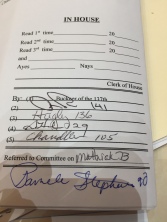 In a separate movement, Atlanta activist, Reiny Esser, created an online petition to call for the sales tax elimination. Serendipitously, Esser was connected with local leaders in Savannah, Georgia working on period supply issues through Adele Stewart, a Junior League of Savannah member with healthcare experience and advocacy skills. Stewart had reached out to local Savannah Commissioner Tabitha Odell, who asked Savannah’s state representatives to add the elimination of the tax on menstrual hygiene products to the city’s “wish list.”